Milk and Muscle Growth Milk and Fat Loss Milk and Rehydration Okay, So What Kind of Milk Should I Drink?

The research is still limited, but studies are showing that milk can be a very effective post exercise drink. The beneficial effects of drinking milk after exercise have been shown to apply to muscle growth, fat loss, and rehydration. One study, reported in the American Journal of Clinical Nutrition, has found that consuming milk after resistance exercise leads to greater muscle hypertrophy, a greater increase in lean body mass, and a greater decline in body fat than consumption of a soy beverage with macronutrient (proteins, carbohydrates, fats) ratios equal to that of the milk. Another study, reported in the British Journal of Nutrition, has shown that low-fat milk is a better rehydrating beverage after exercise than a commercially available sports drink. Read the rest of this article to learn more! 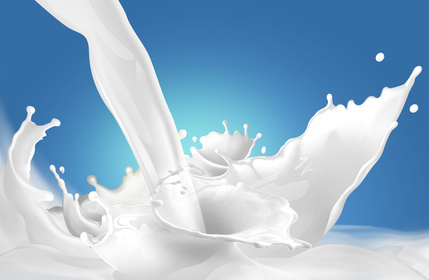 So what is it about milk that makes it such a good post exercise drink? Most weightlifters and bodybuilders know that what they consume after exercise will influence the training results they see. Resistance trainers are usually concerned with the composition and amount of protein that they are ingesting because protein is generally considered to be the key dietary component required for muscle growth. It turns out that milk is an ideal source of muscle building proteins. Not only does it have a high quantity of protein (250 mL of skim milk has approximately 9 g of protein), but the type of protein in milk is also perfect for muscle growth. Casein and whey proteins are present in milk in a ratio of about 3 to 1, respectively. These protein types are digested and absorbed slower than most other protein combinations, creating relatively longer periods of high blood amino acid concentrations for sustained and improved muscle growth. Also, the whey protein in milk has lots of branched chain amino acids, which are considered essential for muscle metabolism and synthesis.

What about the fat loss properties of milk? Well, it seems as though dietary calcium, present in large quantities in milk, can reduce the amount of fat that gets stored within our adipocytes, or fat storing cells. It can also increase the rate at which our bodies break down fat that is already stored. Furthermore, the effects of calcium on fat loss are more pronounced when the calcium is obtained from milk, as opposed to simple calcium supplementation. This is likely due to additional active compounds in milk that work in tandem with the calcium to augment its effects.

The high concentrations of electrolytes in milk (133 mg of sodium and 431 mg of potassium per 250 mL) can increase fluid retention and subsequently improve hydration. So you probably don't need to spend lots of money on sports drinks for quenching thirst after exercise, just have a glass of milk.

Okay, So What Kind of Milk Should I Drink?

Drink regular skim milk. It has very little calories and almost no fat content, but the same protein, carbohydrate, calcium and electrolyte content as the higher fat milks.